The best countries ranked for education-2021

The best countries ranked for education-2021

Young people today will govern the world in the coming years. Education is by far the most reliable predictor of a country’s future success since it shapes human thinking and actions.

We ranked the 2021 Best Countries for Education based on a perception-based survey, which considered three equally weighted country attributes:

The United States of America is the world’s most powerful economic and military power. Additionally, its cultural imprint reaches all corners of the globe, mainly through its popular culture expressed in music, movies, and television. In November 2020, Joe Biden became the country’s 46th president, ousting Donald Trump after one term. The COVID-19 pandemic and ensuing deep economic recession are still plaguing the country. In May 2020, after the death of Black American George Floyd at the hands of police, calls for greater social justice resurfaced in the country. Similar movements around the world were prompted by public demand to address racial inequality in institutions such as the criminal justice system and health care.

The German economy is among the largest in the world, and its role in the international community has steadily grown since reunification. A country in Central Europe, Germany borders nine nations, and its landscape varies from the northern plains that stretch to the North and Baltic seas to the Bavarian Alps in the south.

Canada takes up about two-fifths of the North American continent, making it the second-largest country in the world after Russia. Most of the country’s 35.5 million residents live within 125 miles of the U.S. border. In addition to Canada’s expansive wilderness to the north, the country’s reputation for welcoming immigrants plays an important role in its identity.

France has had an incredible impact on the world for centuries throughout its history and currently as well. One of the world’s oldest countries, France extends its reach around the globe through science, politics, economics, and perhaps most importantly, culture. Since the Middle Ages, France has evolved through kingdoms, empires, and finally a republic. It was one of the first nations to champion individual rights.

Switzerland, officially the Swiss Federation, is a small country in Central Europe made up of 16,000 square miles of glacier-carved Alps and lakes. It is one of the wealthiest countries in the world and is known for its neutrality.

Japan, one of the world’s most literate and technologically advanced countries, is an East Asian nation with four main islands. While most of Japan is covered by mountains and heavily forested areas, its 126 million people live an overwhelmingly urban lifestyle. A long time culturally influenced by its neighbors, today the country blends its ancient traditions with aspects of modern living.

Australia occupies the continent of Australia. Tasmania is the largest island in the country. Before the first British settlements of the 18th century, indigenous people occupied the land for at least 40,000 years.

Swedes live on much of Scandinavia’s northern peninsula and are one of the larger nations in the European Union. They are flanked by Norway to the west and the Baltic Sea to the east. Stockholm, the nation’s capital, was claimed in the 16th century, and disputes over borders in the Middle Ages led to the nation’s formation.

The Netherlands, located along the Western European fringe, is a coastal lowland dotted with windmills, a sign of its development around water. In Germany and Belgium, three major rivers – the Rhine, Meuse, and Schelde – flow into the nation’s busy ports.

New Zealand is an island nation in the Pacific Ocean southeast of Australia, influenced by British and Polynesian cultures. The Treaty of Waitangi, which ceded sovereignty to British invaders in 1840, led to an influx of European settlers. Today, 70% of Kiwis, a term used to describe the people of New Zealand, are of European descent. With the increasingly open addressing of homeland grievances, Maori, New Zealand’s first settlers, have gained a sense of pride.

Denmark was a kingdom that emerged in the 10th century and included two North Atlantic island nations, the Faroe Islands and Greenland. Scandinavia, along with Sweden and Norway, is a cultural region in northern Europe.

Norway is the westernmost country in the Scandinavian peninsula, with mainly mountainous terrain. Most of its residents live in the south, around Oslo, the capital. Norway’s coastline is made up of thousands of fjords, bays, and islands. During the Viking era, the Norwegians established settlements in Iceland and Greenland and developed a maritime culture.

Italy is a country in southern-central Europe whose boot-shaped borders extend into the Mediterranean Sea. Each year, more than 40 million tourists visit its historical cities, world-renowned cuisine, and natural beauty. It is home to Europe’s tallest and most active volcano, Mount Etna, and contains two countries – the Vatican and San Marino.

Nordic Finland, one of the most northern countries in the world, is defined by its geography. As a northern gateway between the East and the West, Finland is bordered by Scandinavia, Russia, the Baltic Sea, and the Gulf of Bothnia.

Austria is a parliamentary democracy with a rich cultural heritage that hosts several important international organizations. In the heart of Central Europe, the modern Austrian state was shaped by the two world wars of the 20th century.

The Kingdom of Spain in 1492 was formed when several independent kingdoms united, creating a richly textured geographical and cultural mosaic that has continued to influence the nation’s unique identity to this day. A large part of Spain lies on the Iberian Peninsula, which it shares with Portugal on the southwestern edge of Europe. In addition, it includes the Balearic Islands in the Mediterranean Sea, the Canary Islands in the Atlantic Ocean, and two enclaves in North Africa.

Belgium is a small, highly developed, urbanized country in Western Europe bordering the Netherlands, Germany, Luxembourg, France, and the North Sea. The official languages of this nation known for beer, chocolate, and castles are Dutch, French, and German.

Korea, officially the Republic of Korea, is a nation in eastern Asia with a long history of conflict that occupies the southern part of the Korean Peninsula. South Korea, liberated from Japan at the end of World War II, was invaded by communist forces in North Korea a few years later. Assistance requested by the United Nations helped end the three-year war and support the transition to democracy in the south. There still exists a critical divide between the two nations along the peninsula’s center.

Ireland is an island nation in the Atlantic Ocean, separated from Britain by the Irish Sea on the east. The Emerald Isle is known for its well-watered grasslands, lively pub scene, and its struggle for independence. It consists of five-sixths of the island of Ireland, the remaining sixth being Northern Ireland, part of the United Kingdom. Ireland became a republic in 1949 after a bloody struggle for independence and civil war in the early 20th century.

Singapore, an Asian metropolis with one of the busiest ports in the world, was founded by the British as a trading colony in the 19th century. A majority of its 5.7 million citizens reside on the eponymous capital island, which is surrounded by dozens of other islands. Singapore has a high gross domestic product per capita and low unemployment, making it one of the richest countries in the world.

The People’s Republic of China, the country with one of the world’s oldest civilizations, has been under Communist rule since 1949. As the world’s most populous country, it is also the second largest by land mass.

Russia is a huge country. It is hard to comprehend its size. The country covers all of Europe and northern Asia and is the world’s largest by land mass. It is nearly twice as big as Canada, the second-largest nation. Japan and the United States share sea borders with it, as well as land borders with more than a dozen countries.

Israel, the only Jewish nation in the world, is located on the eastern shore of the Mediterranean Sea. In spite of its relatively small size, the country has played an important role in global affairs. It has a strong economy, religious landmarks of significance, and strained relationships with many of its Arab neighbors.

Portuguese, nestled along the edge of the Iberian Peninsula and bordering Spain on the east, is a nation with its gaze turned outward. In the 12th century, after driving out Celtic and Moorish settlers, early leaders focused on expanding the kingdom beyond continental borders.

Poland can be considered a middle-sized nation in central Europe with a rich heritage shaped by millennia of conflict on the continent of Europe. The Christian Kingdom of Poland was established formally in 1025, and the Polish-Lithuanian Commonwealth was one of the largest countries on the continent by the mid-16th century. Following World War I, Poland briefly regained its independence after being partitioned by neighboring countries in the late 18th century. In 1939, Nazi Germany and the former Soviet Union invaded the country, beginning World War II.

The United Arab Emirates, or UAE, is a federation of seven emirates in the Arabian Peninsula’s southeast. Located between Oman and Saudi Arabia, the country is home to rocky deserts, wetlands, waterless mountains, and coastlines that stretch along the Gulf of Oman and the Persian Gulf. A series of treaties with Great Britain gave rise to the Trucial States in the 19th century, which currently comprise the UAE. The UAE was formed in 1971 when six of these states merged; the seventh state joined in 1972.

Greece is a relatively young independent nation, having only existed since the 19th century. Nevertheless, its civilization is one of history’s oldest and most influential, giving rise to the concept of democracy, the ancient Olympic Games, and laying the foundations for Western science, the arts, and philosophy.

Czech Republic may have been founded in 1993, but the nation’s history dates back more than 1,000 years. Its central European location has nurtured a rich culture, whilst providing its people with a reserve borne of invasions and interference from larger powers. Because of the country’s history, the people are among the least religious in the world. 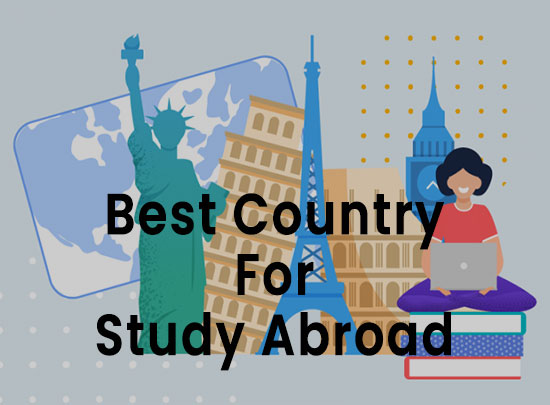 These are the four best countries for studying abroad